1. EXLAIN THE CONCEPT OF TEMPERATURE LAPSE RATE AND EXAMINE ITS IMPORTANCE IN THE UNDERSTANDING OF DIFFERENT WEATHER CONDITIONS.

Environmental lapse rate is a phenomenon of decrease of temperature with an increase in height within the troposphere. It is also called Normal lapse rate. The rate which temperature decreases with height is about 0.65°c for every 100m or 6.5°c depending on the type of air mass, season of the year and atmospheric humidity.

ends and contracts. As well as it can equally loose heat when it rises, ascends and expands. Therefore air looses or gains heat as a result of rising and expanding or sinking and contracting. Here, no heat is gain from external sources hence its named Adiabatic ( internal changes). When a parcel of air move upward, it is affected by low pressure as it expands, stretches and become wider, while air moving downward is affected by high pressure as it contracts and is being heated by compressing.

There are two types of Adiabatic lapse rate that is;

saturated Adiabatic lapse rate is the rate at which saturated air cools as a result of upward movement of air cooling at a longer period at which dew point is reached and condensation takes place. SARL can vary because the warmer the air the more moistuire it can hold. as such cooling at slower rate than unsaturated air or dry air. It should  be noted that during cooling of saurated air, a great amount of latent heat is being released. The SALR may  cool as low as 4°c / 1000m and as high as 9°c/ 1000m. It averages about 5.4°c / 1000m, should temperatures fall below 0°c, as such ttemperature fall below freezing Adiabnatic lapse rate as can be seen below 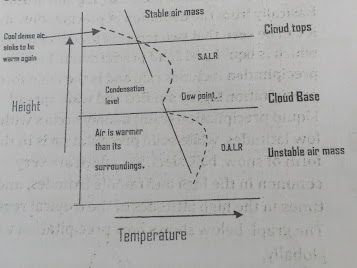 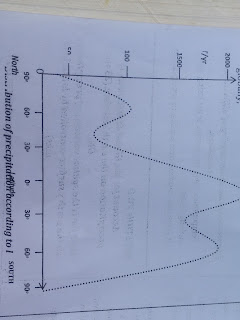 The amount of lprecipitation is high from latitude 0°-10° on both sides of the equator that is north and south. The latitude is known as low latitudes or wet latitudes as seen as seen on the diagram above. The high rain fall within this zone can be accounted  for the fact that equatorial regions has low pressure belts, with annualtemeperature that causes high evaporation of moisture in to the air;and the convergence of  the warm tropical air along the  inter convergence zone.

In the mid latitudes or wet - mid latitudes between latituse 40°-60° north and south, annual precipitation is equally high but not as high as compared to the equatorial or low latitude areas.
Latitudes of low precipityation or the dry latitudes. These are regions within the tropics and the sub-tropical latitudes between latitudes 20° and 30° north and south of the equator. Here annual precipitation ranges between 600-700mm/ year and values may even drop towards the desert margin and fringes to about 300mm/ year..
latyitudes around the poles from 70°- 90° north and south, other wise known as the polar regions or tundra or frigid zones very low precipitation ranging to just 250mm/ year; and when it occurs it is in the form of snow. This low temperature and atmospheric humidity, with little evaporation.
Join Telegram Channel
Getting Info...
#Geography #METEOROLOGY AND CLIMATOLOGY