Land is so precious that everyone needs it for a particular purpose. Therefore the price paid for land depends on its type of land use or function.
Beltus

How does the knowledge of urban bid rents explain the substitution of urban land use from the city center to the periphery?

Land is so precious that everyone needs it for a particular purpose. Therefore the price paid for land depends on its type of land use or function. The urban land value or bid rent theory is an urban equivalent to that of Von Thunen because both theories are based on locational rent.

The price paid for the most valuable site within the CBD is called Peak Land Value intersection and is often occupied by commercial functions and away from the CBC land becomes less competitive for commercial or retailing but now available for other functions. Land is very expensive at the city center due to: 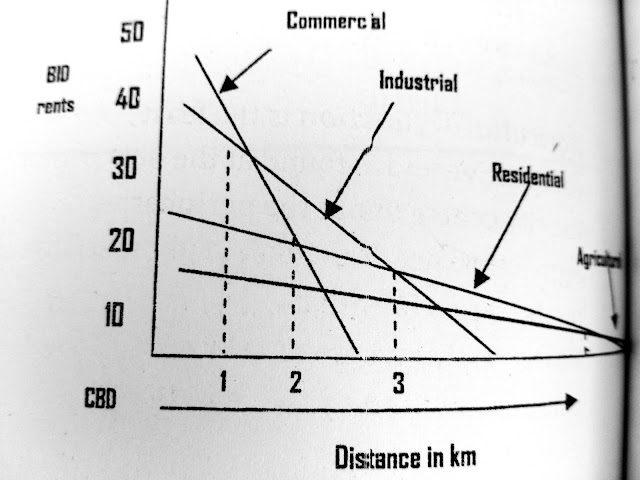 The diagram above shows urban land use or bid rents within a city occupied by various functions with increasing distance from the city center to the peripheries. June 2016

As seen on the diagram above various functions occupy different locations within the city structure due to the following.