A soil profile refers to a vertical secion accross the soil from top to bottom showing the different horizons often distinct in terms of physical and  chemical characteristics. An idealized soil profile consist of three made layers namely the A, B, and C horizons. only zoonal or matured soils have welled developed profiles. 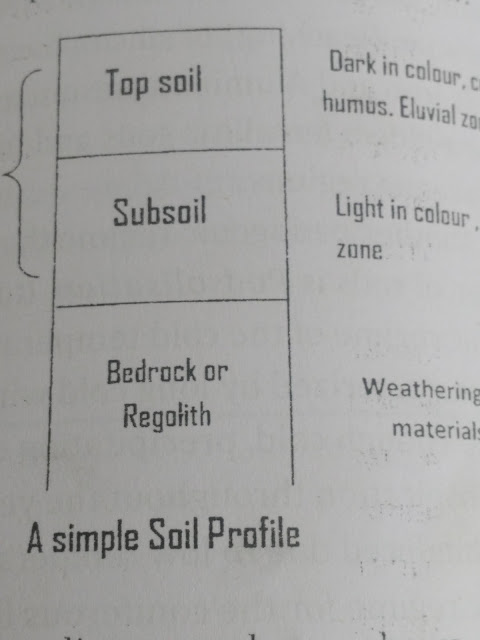 The A horizon is known as the top soil. It is  dark in colour and rich in rganic matter, matter due to the presence o vegetation and animals species which provides the readily needed orgabinic matter for decomposition , as such its is azone of Bilogical activity.

The B horizon is the middle horizon where materials are precipitated ; it is lighter in colour due  to its lack of organic matter. Since it involves deposition of materials brought above, it is therefore a zone of illuviation or the illuvial zone. the B zone is also known as the  sub-soil.

FOR EITHER THE FERRALITIC SOIL TYPE, CANDIDATES ARE EXPECTED TO BRING OUT THE VARIOUS CHARACTERISTICS OF SOIL PROFILES.

Soils are reddish brown as a result of high precipitation and clay minerals break down rapidly.