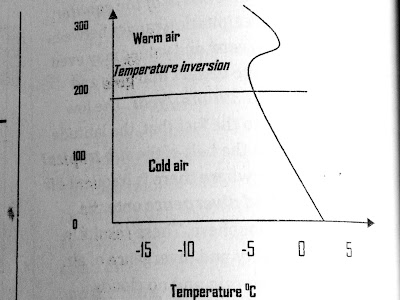 Lower level or ground temperature inversion with rapid loss of heat through radiation during longer nights.

They occur during fronts or depressions. This is when different air masses with contrasting characteristic meet. that point of convergence is called a front. The two air masses could be light warmer air mass meeting with a denser cold air mass. The light air mass rises while the cold one sinks to the lower surface, though not touching the ground. Cold air therefore lies below warm air at the lower heights thus temperature inversion. 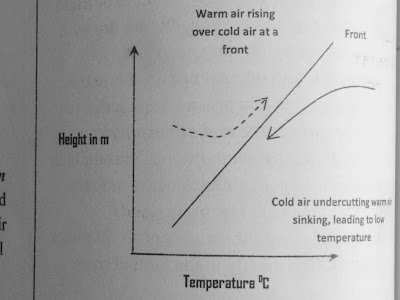 Many reasons ca be accounted for the abnormal tendency o temperature increasing with an increasing height at the troposphere.

Longer nights: During longer nights more intense cooling by terrestrial radiation occurs. This is a result of the chilling of the air layers in contact with the ground, which is rapidly losing its heat by terrestrial radiation. The rapidly cooling ground surface at nights causes the air layers in contact with it to be chilled or lose its heat by conduction. Consequently, the air layers further up not affected by cold ground, remains at a temperature higher than that of the chilled air layer below in contact with the ground. Thus with increasing height the temperature rises, the normal lapse rated is reserved.

Clear skies: Skies with few or no clouds and low humidity permits rapid escape of heat back to the atmosphere, this is because of the absence of clouds with enough moisture or water vapour in the air to trap heat and prevent it from escaping. For instance, the heavy cloud cover of the equatorial regions explains why the day temperatures rarely exceed 30°C and why the night's temperatures are not much lower. In desert with clear skies and no clouds, dry air, high daily temperatures are witnessed of about 38°C and much lower night temperatures of °C or even below.
Fairly stable air with little mixing, such that it remains on the cold ground surface long enough to be chilled. Under such conditions, the air can condense and give rise to fogs, mist and even frost, when the sun begins to shine, the inversion soon disappears. Temperature inversion has many effects on weather conditions. It is associated with stable atmospheric conditions characterized by:
i) Subsiding air masses which warms adiabatically
ii) Reverse lapse rate
iii) Calm weather/ High pressure
iv) Very low temperatures
v) Foggy weather
vi) Smog / pollution flume
vii) Reduced reversibility