For long it has been known that crustal movements or changes takes place only in the continental landmasses,
Beltus

Access the strength of the concept of sea floor spreading or expansion.

For long it has been known that crustal movements or changes takes place only in the continental landmasses, but little or nothing was known about such movements under the sea or oceans, this could be as a result of the fact that the ocean floor was inaccessible and more to that limited technical knowhow t determine actually the nature of the ocean floor. During and after the second world war ( 1950 and 1960) new and advanced instruments, such as growing number of trans oceanic ships carrying new sonar equipment permitted a more precise and deeper exploration of the ocean bed. These exploitation revealed a lot about land forms beneath the ocean floor. In particular it revealed that sub marine mountain chains lain the floor of every ocean rising to great height / much higher than mountain ranges in the continents. On these submarine ranges are found rift valleys on their summits around which volcanic activities and earth quakes are frequent. Else where relatively nearer to the continents still in the oceans, the ocean floor plough deeply downward into great structure valleys known as trenches which are indeed the deepest part of the ocean floor. Earth scientist ( Geologist, physical or natural geographers) have put together the theory of crustal motion which explains how these landforms have been formed and why they are located where there are. This new theory about submarine major landforms is known as sea floor spreading. It states that new crustal materials is been formed constantly along the mid-oceanic ridge as volcanic eruption brings magma which solidifies into ocean crust to build up the mountains. When ever the new crustal material comes up, it pushes aside and apart the older material that had already solidified on both siders of the mountain, thereby resulting in the expansion or spreading of the sea floor as represented below 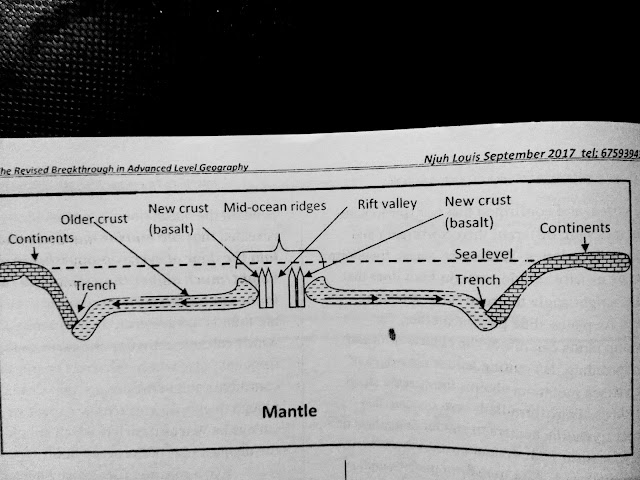 This theory was observed and studied by Americans Geologist Harry H. Hess in the 1960s. He observed the age of rocks on the sea bed from the middle of the Atlantic ocean to the coast of north America. He confirmed that though the rocks ( Basalts) were the same, but those nearest or closer to the mid oceanic ridges were recent (new) and were still being formed, as on the island of Greenland situated on the mid-oceanic ridges. The oldest basalt were the Coast of North America and the Carribean sea. He thus suggested that the Atlantic ocean is widening up at the rate of 8cm per year.

As he observed, the rising or upwelling of magma on the cracked crust, as a result as well the accumulation of magma beneath forms the mid-oceanic ridged. As magma rises continuously it tends to shift the old basalts away from the central axis and remaining in the position as new basalts.

It explains the origins of the major features of the sea floor.

The mid ocean ridge are the result of magma which rises and accumulates on a raised or uparched part of the sea bed or ocean floor from here the new crust spreading outwards towards the continents to form the ocean basins and Abyssal plains.

Another strength of this theory is that it has been proven beyond doubts that the ocean crust rocks near the continents in every ocean are older than the ocean crust near ridges but they have all come from the ridges.

Moreover, like any theory it has its short coming which is that, it explains the origin of major landforms only in the oceans and cannot be applied to the major land forms on the continental surface.