Examine the concept and mechanisms involved in the cumulative causation process. June 2011.

The Swedish economist by name Gunnar Myrdal in 1956 formulated the cumulative causation theory which he attempts to explain regional inequalities of wealth. He argued the regional differences of wealth are the natural outcome of economist development and the most inevitable result of market forces. According to him no one region can prosper without affecting the prosperity of another.

Therefore according to Myrdal, the process of cumulative causation that brings economic development initially starts where there are such natural advantages as

The ability to accept changes

These abilities soon set in as the process of cumulative causation, whereby centripetal force (in war pulling) begin to operate attracting capita and labor into the expanding area. This further stimulates the prosperity of the area at the expense of the surrounding region. The process is circular and cumulative effect could be summarized as follow,

New economic activity call for an increase in employment and purchasing power which in turn increases demand for infrastructure, increase local market, increase in the possibilities in invention and 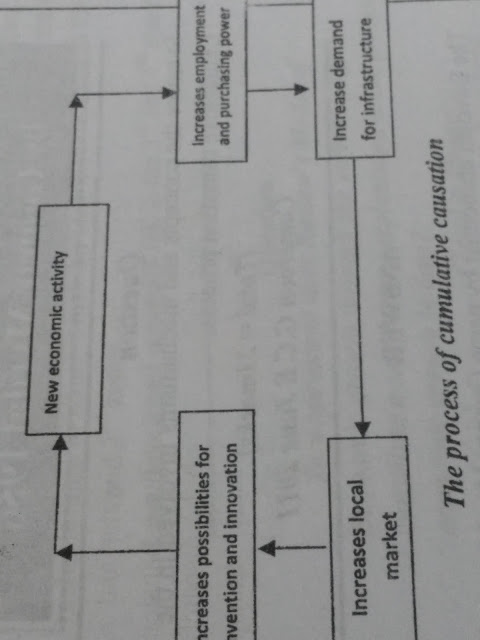 The process of cumulative causation involves the multiplier effect. This is Where the new and expanding economic activity in an area creates extra employment and raises the total purchasing power of the people. The extra population and greater purchasing power increases demand for infrastructure, or social amenities such as school, houses, roads, pipe borne water consumer goods and services, thus creating even more subsidiary industries which demand local goods and services which use their products or supply them with raw materials (primary industry).

Myrdal called the movement of wealth from poor regions into the rich regions due to centripetal forces as backwash effect, it takes place because of the better facilities and opportunities offered by the growing center region , the center region also act as a brain drain for doctors, lawyers and others highly qualifying professionals moving from poorer to richer regions. This can also take form of manual workers taking up menial jobs in richer countries. This kind of brain drain is known as Brawn drain.
The difference between the poorer and the rich regions is aggravated when the rich regions flood the markets of the poorer countries with cheap products, thereby preventing the poorer countries from developing their economies. this results from an industrial expanding region in one hand and a declining region on the other hand.

With time the increase wealth in the more developed region would percolate downward to a less developed region. This downward percolation of wealth according to Myrdal is called the spread effect. This percolation of wealthy may consist of investments of capita and advance technology, decentralization of branch plants. In this ways the economies of the poor regions are stimulated and the process of cumulative causation trigger off in these regions.