Desertification refers to the spreading, extension and encroachment of desert conditions and characteristics into neighboring areas of the world. Howe
Beltus

Many authors over the 20th century have given many different definitions of desertification due to its occurrence. However, due to controversy over its encroachment and prevalence whether provoked by physical or human factors, the aspect of desertification remains reality.

Desertification refers to the spreading, extension and encroachment of desert conditions and characteristics into neighboring areas of the world. However, the intensity and severity of desertification increases in semi-arid environments which form part of the tropical grassland ecosystem with very low mean annual rain fall amounts. Most affected areas are those that belong to third world countries such as Africa, Asia, and Latin America. Conversely, some developed countries like USA have been decertified close to 10% of its land.
Case study: Desertification in the Sahel zone

Most affected areas are the Sahel regions of Africa which is a narrow belt of semi-arid areas of the Sahara desert of North Africa. The Sahel regions lies immediately south of Africa. This covers Eritrea, parts of Somalia, Northern Ethiopia, Sudan,, Chad, Northern Cameroon, Northern central African republic, Niger, Nigeria, Burkina Faso, Mali, Mauritania and Senegal as can be seen below. 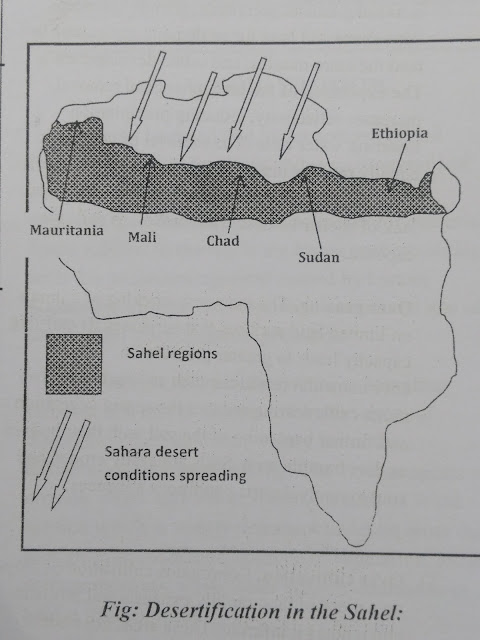 According to Goudie (1990) " the question has been asked whether this process desertification is caused temporary by long drought periods of high magnitude or as a result of longer-term climatic changes towards aridity, is a result of human action through man's degradation of the ecological environment in arid regions or a combination of both. Although both humans and physical factors contribute to desertification, severe and intense desertification is recently seen to be provoked by human action for his economic gains and as to meet up with the rapid growing population".
as earlier alluded, it has been argued that greater intensity of desertification is provoked by man's activities for his economic gains.
Natural or physical factors are;

Desertification has brought about many consequences such as;
Solutions to desertification
Join Telegram Channel
Getting Info...
#GCE A - LEVEL GEOGRAPHY (CONTEMPORARY ENVIRONMENTAL ISSUES) JUNE 2017