THE PHYSICAL GEOGRAPHY OF CAMEROON

Cameroon is located between 2° and 13° north of the equator and longitude 8° and 16° of the green wish meridian.
Beltus

Cameroon is located between latitude 2° and 13° North of the equator and longitude 8° and 16° East of the green wish meridian. It has a total surface area of about 475000 square km.

Cameroon is well known  diversity in physical and human land scape. This diversity has given the country the name AFRICA INMINIATURE which means the entire Africa represented is a small triangle. The physical environment is characterized by a wide variety of relief features that is vegetation types, variety of soils climate and rocks. This dynamic physical land scape has given rise to a variety of economic activities such as agriculture mineral, energy, fishery and water resource exploitation, since human activities depend on the physical environment.

RELIEF OR THE STRUCTURE OF CAMEROON

Generally, Cameroon is divided into 5 main reliefs or physical regions which include;

1. ADAMAWA PLATEAU:  This covers the Adamawa region of Cameroon and lies between latitude 6° and 8° North of the equator.  It is a vast ray platform with a height of between 90m to 1500m above sea level. The Northern part of the these parts of this plateau is steeper that the southern part. It is a faulted  and the uplifted rocks dominated by granitic rocks. This plateau has many volcanic peeks such as TCHACBAL MBABO, MOUNT GOTE, MOUNT MAMBIA, GANGDABA. and there fore considered the main water shed of Cameroon with many radiating outwards.

2. THE WESTERN HIGH LANDS: This relief regions stretches from the west region to the north west region of Cameroon. It has an accidented  relief with many volcanic mountains such as; mount Oku, mount Bamboutous, mount Koupe etc . The volcanic mountains are separated by techtonic mountains or plains such as Ndop, Mbaw plains. Western high lands also have an altitude of about 1600m. There are also water fall such as Menchum, Baleng, And the Ali water fall. This high land is very extensive with christaline masses such as the Mbam massif. It is also highly disected by mainly reverese such as the river the River Menchum.

3. SOUTH CAMEROON LOW PLATEAU: This relief region covers the entire central south and east regions and lies between latitude 2 - 6° North equator. South Cameroon low plateau is fairly flat with average altitude with about 650m. It is steeper around the bangs with the coastal low lands and gentle towards the Congo basin. It has volcanic mountain peeks; mount Febe, mount Mbam Minkon and the Guimbiri mountain. There are also Insebergs around the Yaounde area  as well as numerous hills like the Ebolowa hill. This region is largely undulating and disected by large rivers e.g the Nyong, Djerem.

4. COASTAL LOW LANDS: This regions stretches from the South West region through the Litoral and ocean division in the south west region. The coastal lowlands have a gentle topography with about 90m.

The coastal margins of this regions have mangroves swamps, creeks, sand bars and spit. This region is divided into 3  parts which  include;

- The interior coast land which are encircled by the the rumpi hills and western high lands.

- The low lined coast which is divided into the Ndian basin, Douala basin and the Kribi basin.

- The rocky coast which has large rock and cliff. It includes the zone around mount Cameroon and the Kribi rocky coast.

- Benue depression which lies at the foot of the Adamawa plateau and has an altitude of between 300-350m.

- The Chad plain which extends from the foot of the Mandara mountain to lake Chad. This foot is very flat with an altitude of about 300m. 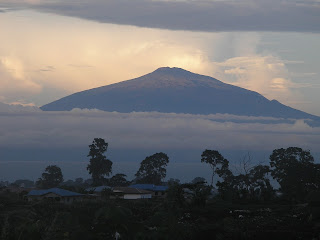 This is a zone of past volcanic activity which stretches from the Atlantic ocean through Mount Cameroon in the coastal low land passing through the western highlands right up to the Mandara mountain in the northern low lands. The main volcanic mountain here include; mount Cameroon, mount Ekinde, mount Koupe, mount Maniguba, mount Lefo, mount Bamboutous, mount Oku, mount Mbam Massif, mount Gotel, Tchabal Mbabo etc. Apart from mount Cameroon which is still alive, the mountain in this regions have become extint volcanoes.

1. Compare the Adamawa plateau and the Coastal low lands in terms of their relief and characteristics.
2. Describe the relief of the western highland and the south Cameroon low plateau.
Join Telegram Channel
Getting Info...
#G.C.E A - LEVEL CAMEROON GEOGRAPHY.