Trace the origin of either the Common Wealth or "La Francophonie" and examine the view that either of them is an instrument to Neo-colonialism. (June
Beltus

Discuss the ways in which vegetation influences the hydrological cycle.

The hydrological cycleor water cycle is the constant circulation of water from the land and sea s urfaces to the atmosphere, It involves the lost of water from seas, lakes, oceans, rivers through the process of evaporation in the form of water vapour, which later on condenses into precipitation and falls back on the land,as rainfall, snow, some flow into streams; rivers, seas, through runoff or overland flow, while part is being intercepted by vegetation. Some of the precipitation infiltrates, percolate inside the soil to form ground water, far below is the water table. The water eually lost back to the atmosphere again in the process of evaporation from oceans, lakes or transpiration from plants (evapotranspiration). The water lost in the form of water vapour condenses to precipitation and process continues like that. Therefore it is a circulation of water without any end, that is why it is called a cycle as can be seen below. 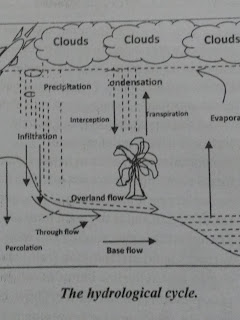 The diagram above shows the various stages and processe of the hydrological cycle. Solar radiation is the main input of energy that keeps the cycle in motion through the provision of energy. The global hydrological cycle as seen above can be described as a closed system since all its inputs, processes are withing the system and no water is given out or lost.

The role of vegetation in the global hydrological cycle

Vegetation is an area that is made up of plants ( being trees or grasses). Within the hydrological cycle, vegetation plays the following role:

The vegetation provides the only means within the hydrological cycle through which precipitation is been intercepted ( processed by which trees canopy or foliage trap or capture rain drops) either through primary interception which is carried out by superior layers or overgrowth species of trees or the inferior layers or undergrowth species.

The vegetation equally lost the intercepted water back to the atmosphere in the form of transpirtion, as an output, which later condenses to fall back as precipitation. Vegetation equally increases the rate of which water moves into the soil in the process of infiltration. This is through their root systems where cavities are being created to ease the movement of water ( through flow). The roots also prevents overland flow or run-off.